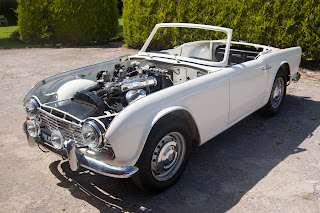 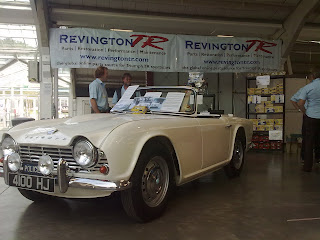 This white TR4 was supplied new to Southend-on-sea County Borough Constabulary in May 1962. Superintendent Bill Burles allocated the car the task of ‘fast pursuit car’ a task which it performed very well according to officers that either drove the car or were observers at the time. The car was equipped with a Pye Radio, Winkworth bell, air horns, spot lamps, reversing lamp, windscreen mounted hand lamp, front and rear Police signs, rear stop sign and wing mirrors. All of which was fitted in the constabularies own workshops.

Originally the car had no seat belts and one officer told me that he hung onto the underside of the seat whilst in fast pursuit. Before too long the seat was wrenched from the floor so the workshops welded stout plates to the chassis and bolted the seats to these. Later, seat belts were fitted.

Officers invariably drove the car top-down and always wore their caps with chin straps in place. One winter with considerable snow and ice, the car was called upon to make an unusual journey. A call came in from the Southend Hospital to deliver an urgent drug from a London Hospital. There were no helicopters in those days so the TR4 was pressed into service to undertake the journey which was done in double quick time, much to the satisfaction of the hospital and patient in particular. A picture of the car was used on the front cover of ‘Advanced Driving Explained’ by Inspector W. H. Jobson price 1/6d.

Eventually of course the car was retired from the police force and passed into private hands. I first came across the car in the late 70’s when owned by my good friends Debbie and Ernie Cole. When the car had deteriorated to a somewhat dilapidated state, they decided to sell and I became the new owner in 2005. Since then the car has been completely stripped and rebuilt, not as a concourse car but to represent the car as closely as possible to a condition when used by the Southend-on-sea constabulary. Where special equipment was missing this had been purchased with the assistance of the Police Vehicle Enthusiasts Club. 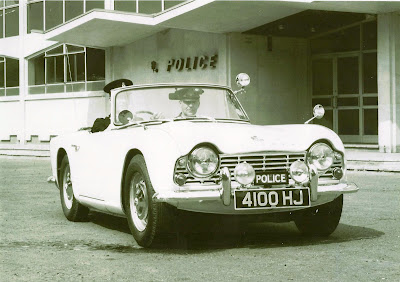 The second photograph shows the car 99% complete shown at the TR Register International at Harrogate in July 2011. Beady-eyed observers will notice that the car is missing the long armed wing mirrors and the long areal, which is just visible behind the drivers right shoulder in the period shot above. If anyone can help me to find these parts I would be most grateful and as usual I can be contacted at neil@revingtontr.com

Updated 27th March 2013.
As you can guess, the story didn't end there. The parts were found and the car is now complete. 4100 HJ  has already been the star of a couple of Motoring Magazine Features and what a star she makes. A quick look at this photo is all that is needed to see what start quality this car has. Neil has made a superb job of this restoration project and I'm sure it will been seen on the show circuit for sometime to come.