The Barbados Rally Carnival turned out to be one of the best rallies we have ever done. The stage rally used some very demanding Bajan roads which suited Ford Escorts with good suspension travel but that didn’t stop us having great fun in the TR5. The two part carnival consisting of a sprint at Bushey Park followed by a twelve hour stage rally in the north of the island which proved both demanding and exciting. It was certainly a rally of attrition but we finished 2nd in class behind David & Sarah Rayner in a Sunbeam Tiger.

Sue and I first visited Barbados in the early 70s when Sue was an air stewardess for Laker Airways, over the years we have revisited a few times but it had never crossed my mind that one day we would ship a car out to take part in one of their stage rallies. The opportunity arose last year and whilst the rally itself was attractive the financial deal was even more attractive. For timing reasons we couldn’t partake in 2010 so I promised myself we would take part in 2011. Sue has competed in many road rallies but has always said she wouldn’t do as she puts it ‘helmets’. When I entered the event and talked about a navigator the conversation went something like, “I’ll navigate”, ‘but you don’t do crash hats”, “I do now, you’re not going to Barbados without me!”

The car was delivered to Portsmouth and transported on a Geest ship and arrived in Barbados along with 13 other competitors cars in the nick of time. We flew out Virgin Airways arriving on the Thursday, but there were no cars, 4 O’clock Friday afternoon the cars arrived. It was a mad dash to unpack them and drive the 20 minute journey to Scrutineering for 5pm. But of course we were now on Island time and 5pm doesn’t mean 5pm at all, it means whenever you turn up, so it was no problem. 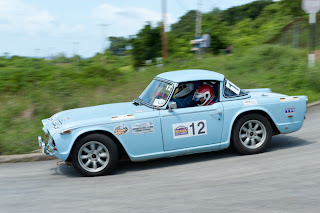 The event proper started on the Saturday at Bushey Park which is a compact circuit used for car racing and karting. The event was more of a rally-sprint than a true sprint in that we started on the pit road followed by a hairpin right to go round the circuit the wrong way, so all the curbs were in the wrong place and corners that usually opened up now tightened up. One complete circuit and a flying finish took just over 60 seconds for the older cars and low 50s for the winners. Our little group of pre ‘68 cars consisted of David and Sarah Rayner in the Tiger, John Everard in an Alfa Romeo GT and Sue and I in the TR5. We finished the sprint in the order: Tiger, TR5, Alfa. The sprint results were used to seed competitors for the stage rally the following weekend. Locals Greg Cozier and Jamie Marsh in their MkII Ford Escort RS, 5 times British Rally champion Jimmy McRae with Ian Grindrod in a Tuthill Porsche 911 and Francis Tuthill and Llinos Davies in another Tuthill 911 filling the top 3 places. The cars were stored at Greg Cozier’s place, where he had plenty of barn storage area. Getting back there from the sprint was a nightmare as the heavens opened and when it rains it in Barbados it means it: you couldn’t see your hands in front of your face! 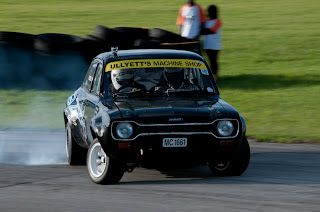 The next competition was the rally the following Saturday but in the meantime we had to write the pace notes. Our little party consisted of Sue and I, David and Sarah and our good friend Ian “Mac” McGillivray who had come along to help out with service and to drive our support vehicle. We spent the period between the sprint and the stage rally reccying and pace-note writing, this of course didn’t take all week and we had to fill the gaps by exploring the island, lounging around on the beach and/or drinking rum, a tough job but somebody had to do it.

The format of the rally is three stages of about 6km long, which are run one after the other in one direction and then one after the other in reverse (direction not gear!). The rally started at 12 noon and the later part of the 15 stage rally took place at night time with the first car expected home at 12 midnight. The roads used for the rally could best be described as a patchwork quilt where patches of tarmac had been laid on previous patches and in your ordinary hire car you really wouldn’t want to do more than 50kph. Obviously these roads where chosen for their challenging nature. Not all stage kilometres where rough, in parts we had nice smooth tarmac to play with. To give an idea of how rough some of the stages where the bonnet came open on the TR5, bounced around on the limit of the safety catch, which is only about 10cm but after a short while it crashed down shut, locking itself and stayed so.


David and Sarah managed to complete the event without incident and came first in class, John in the Alfa had an unfortunate miss-hap with the rear suspension at the very first stage which prevented him from taking part any further. The TR5 sadly had a problem too in that we had chosen to use a locally blended 98 octane fuel as the locally pumped fuel was said to be as low as 90 octane. I found out later that the ingredient used to up the octane was toluene. I know from experience that this nasty stuff melts rubber, our TR5 was affected first of all by an injector going down, which Iinitially put down to an unfortunate isolated incident. However two more injectors went shortly afterwards and upon opening the bonnet I saw fuel pouring out of the metering unit at the end of the 9th stage.

We limped back to service and Mac and I quickly disassembled the metering unit and distributor pedestal where the problem became immediately obvious and although I had taken a ton of spares the pedestal seals (which were destroyed) were not one of them. Sadly we had to call it a day but as we had done three quarters of the rally and the rules state you’re a finisher if you complete two thirds of the rally, we ended up second in class behind David. For which we were presented with a nicely engraved bottle of rum (no surprises there then!).

Prize giving on Sunday was on the Jolly Roger, this has got to be the best prize giving ever, cruising up the west coast of Barbados on a pirate ship with free drinks and loud music. Darren Moon and Eurig Davies in their Ford Escort RS picked up first prize, which apart from the pots included a free package to compete next year, a well-deserved win after a consistent performance. Jimmy McRae and Ian Grindrod came second in a Porsche 911, locals Nigel and David Reece came third in another Ford Escort RS. The top 10 results can be found on the official rally website.

I mentioned at the beginning of this piece about the attractive deal, you would be astonished to learn that the whole package cost less than £2000. If the event interests you keep an eye on the website for the 2012 travel package and entry form. 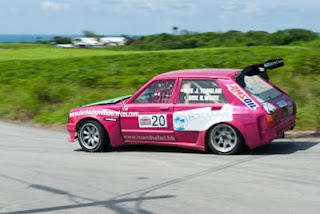 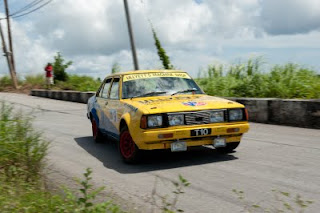 All good things must come to an end; Monday was taken up with repacking everything into the car for the homeward journey and we flew home on the Tuesday. It was disappointing that the fuel issue curtailed our rally but we will be back next year with a view to completing the event without mishap; we might see you there! 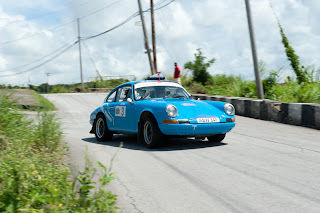 Many thanks to the organising team, headed up by Greg Cozier and Spencer Hutchingson for making our trip most enjoyable and to Sean Chandler for letting us use his photos, more of which can be seen via the link below. 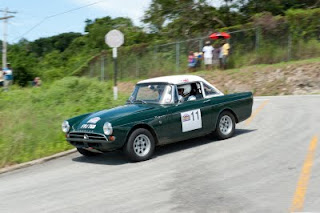