Cape to Cape in a TR3A 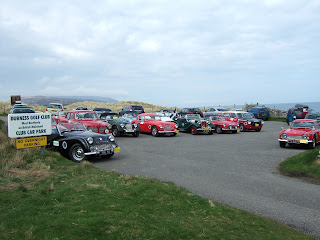 Tony Thompson one of Revington TR's valued customers recently embarked on the "Grand Tour Cape to Cape" a journey taking them all the way from Scotland through England, Wales and down to Cornwall, taking of course his trusty TR. Tony has kindly allowed us to reporduce his article in full.

If you have any "TR Tales" that you think other like minded souls might be interested in please let us know and we will do what we can to include them in the newsletter.
Here we go with our first "TR Tale".

On Friday 20 April John Catt, navigator, and I set forth in the trusty TR from home to attempt the Grand Tour Cape to Cape. This involved getting to Cape Wrath and then following a devious route down Scotland, England and Wales to Cape Cornwall over 8 more days. The aim:- to complete the route as prescribed answering various clues and doing a variety of special tests, and to raise funds for Macmillan Cancer Support. The entry included a number of pre-war cars and a few others older than us, but only a TD MG turned out from that group, the others turning up in moderns! The rest of the entry was E-Types, a Healey 3000, Morgans, Porsches, MGBs and a MGC, a clutch of Mazda MX5s and sundry others. We ended up the second-oldest car after the TD. Total entry, 44 cars.

First off getting to the north of Scotland. We went the pretty way via Hereford and Whitchurch to the M6 at Manchester, then to a night stop at Carlisle, and the following day up to Ullapool via Glasgow, Fort William and the Great Glen. This all went without mishap except for the odd very heavy shower, which was a pain as we didn't put the hood up!
Arriving at the Royal Hotel Ullapool at teatime we found we were about the last to arrive. Did all the signing on and attempted to apply sponsor stickers in the rain (failed!). The following morning we were off in sunshine to Cape Wrath (or Durness to be precise as the Cape is only accessible by boat ferry and minibus, and there wasn't capacity for us all to go). Trouble was the event wasn't due to start 'til 12:45 to allow time for the Cape visit, which was a frustration to those of us who had to hang about for 2 hours. Happily the day was fine if cold.

The route took us back to Ullapool for the night, and was relatively short (231 miles - see later!). We got all the clues (e.g. collection times on postboxes, dates on bridges etc.), but missed a secret check for which 4 penalties (penalties equalled fines of £1/point). Again some very sharp showers (literally sharp in the case of a hailstorm!).

Next morning we left Ullapool at 8:00 (a bit too early for me) to drive down the coast roads of West Scotland to the Kyle of Lochalsh, and then across the Highlands to our night stop on Loch Fyne. An absolutely glorious day – perfect visibility and the scenery superb in every direction. Lunch halt at Applecross after a wiggly drive along the tiny coast road, which still accommodated a full-size artic lorry - don't know how he did it. We dropped one clue just before the halt at Applecross – another £4. After lunch up over the precipitous Pass of the Cattle. Two more secret checks, but these incorporated a hill start on 1 in 4 or 5 gradients – you guessed, penalty for slipping back 2 penalties. The second of these was a hillstart in reverse which was challenging, and I overdid the power generating much wheelspin. Happily although we didn't go backwards as required for some time (much tyre smoke) we didn't slide forwards either, and eventually scrabbled backwards over the line between 2 cones.

After a very frustrating afternoon trying to fathom the organisers tulip diagrams giving the route (he had missed one out which didn't help!) we got to Loch Fyne around 18:00. 324 miles that day! 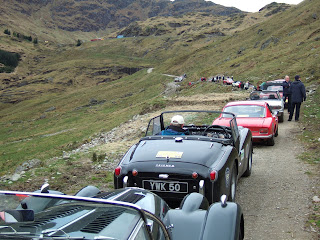 Tuesday dawns still dry-ish and we set off for a climb up the Rest and be Thankful speed hillclimb, just west of Loch Lomond. The climb was used until 1969 since when it fell into disrepair and was only used as a rally stage. We found it in reasonable condition but with a very loose surface preventing use of full throttle. We did timed runs up it but I was too enthusiatic and untidy to do very well (107 seconds). Amazingly a team of ladies in their 60s or 70s in a standard Volvo P1800 like The Saint's were very quick and beat all the Porsche 911s in 104 seconds – much laughter! Fastest time 101 seconds by the MGC – it wasn't standard by any means.


More tulip trouble (we finally got the hang of the organisers logic) on the way down to the night stop at Lancaster via Dumfries and the edge of the Lake District. 291 miles that day.


Weather forecast for Wednesday is very wet, so we reluctantly put up the hood for a morning in the Yorkshire Dales. Yes, it rained but not enough to spoil the beauty of the scenery completely, in fact it was very atmospheric. However we then had to drive down to Lake Vyrnwy for the night stop which meant going through Heighley and Rochdale in pouring rain and the rush hour. I never thought I'd be pleased to see the M62! Then across to Chester and down into Wales. 281 miles.


Thursday and the first of the driving tests. Down the hotel drive against the clock to a passing place halfway, stop between 2 cones (loose surface) and reverse back out, then charge on down to the bottom of the drive and stop again between another 2 cones. I suppose it was about 400 yards, and complicated by the fact you couldn't see where to go from the start. Then off down through Wales to Dolgellau, Machynlleth, Llanidloes, Rhayader and Kington in patchy rain before cutting across via Leominster and Gloucester for our night stop at Wooton Wawen. 212 miles so quite short!


Friday should have been easy, as it was home territory. Down to Bradford-on-Avon then across the Mendips to Cheddar Gorge and across the levels by Wedmore to Bridgwater, the Quantocks and Exmoor. All went well at first and we even popped home to Westbury-sub-Mendip to relieve the TR of the laundry and unwanted spare petrol. Tulips around Godney were no trouble for us, and we were soon near Bishops Lydeard. Brain fade then set in and we spent a good hour going around in circles trying to fathom the route. In the end we never went up onto the Quantocks and missed two checkpoints accordingly. Rather tired and dispirited we continued on the correct route to Porlock, then south via Dulverton to the night halt outside Exeter.


The last proper day! Saturday morning started in torrential rain with another driving test (driver does Le Mans start to sprint to the car, belt up and start engine, roar around edge of car park to stop astride line), then off up onto Dartmoor. Thick mist across to Two Bridges, and a good half hour spent looking for a milestone with mileage to Tavistock apparently in hedge beside road – we never found it! Then across into Cornwall at Gunnislake and a few very twisty hilly miles in lanes of North Cornwall including an almost vertical hill start at a checkpoint. We managed but the TR grunted a bit! The afternoon spent at various locations doing driving tests around cones before we went off to Cape Cornwall and the end of the route – hooray! From there to our last stop at The Greenbank in Falmouth, and the last dinner.

But it wasn't over. The organisers had arranged a morning of driving tests in the centre of Truro followed by the awards presentation. Pouring with rain again, and blowing a gale but we set off gamely. The content of these tests had been kept strictly secret, and it transpired as we huddled in the rain in Truro that the plan was to do a “regularity” test starting from Lemon Quay and driving round city streets for about a half mile to a finish line. Then some figure 8s around the war memorial and various concrete obelisks down the centre of Truro High Street. This was barking mad, especially as the speed for the regularity was set at 29mph (completely unachievable even on a good surface) and the surface was soaking cobblestones. We were third car away and started a gentle tour of the streets rather than any dangerous stuff to be stopped halfway by Dennis the organiser who called the whole thing off as too dangerous (Yes!!!). He had apparently paid someone a lot of money (£7000??) to put up barriers and provide crowd control which didn't happen, but it would still all have ended in tears I think.


After the awards and a welcome free pasty we set off for home up the A30, still in gales and rain. It was lovely to get home to peace and quiet (and dry!), and I found that though I was fine on arrival before an hour had passed I felt quite peculiar and didn't feel right again for 2 days. So much for adrenalin! As I write the TR awaits a full service and attention to the overdrive, which became lazy about halfway through and only usable above 50 mph. Dirt in the system I hope, and easily cleaned out. Otherwise it needed no attention at all, and achieved 30.5 mpg despite being driven hard much of the time.


Although the event was very tough we both enjoyed the whole experience, and particularly the high points in Scotland – wonderful scenery in just the right weather. I raised just over £1000 for Macmillan, and the event as a whole around £61500, which was most worthwhile. Final statistic – we covered 2602 miles from start to finish, which is a lot more than the TR has done in any of the last 5 years or so!
Posted by Unknown at 17:17