The car will be driven by me and navigated by Sue Revington with support from my old friend Ian (Mac) McGillivray. Last year Bernard Northmore who shares a TR with me from time to time on road rallies suggested we took the TR to Barbados to take part in this event. Unfortunately last year wasn't convenient but the "deal" was so good that I made sure I was free to do it this year. Even if Bernard had wanted to navigate he wasn't going to get a look in as Sue decided that she was not going to let me go to Barbados without her and that she would be occupying the navigators seat. 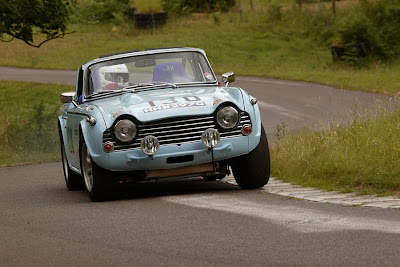 The event is a two stage affair on the first weekend there will be a rally sprint where two cars start simultaneously with part of the course on grass and part of the course on tarmac. Halfway round the cars swap lanes so that at the finish both cars have covered the same amount of ground.

The weekdays are devoted to writing pace notes for the rally which takes place the following weekend, but I am sure there will be plenty of time left over for beach activities which are surely to include the odd rum punch and Banks beer. As the name of the rally suggest we are expecting a truly carnival atmosphere as the organisors have put in place a variety of receptions for our enjoyment.

The rally starts propper midday Saturday July 23rd and finishes on Sunday afternoon 24th. Although Barbados is a reletavly small island, there are masses of small roads and as the island is far from flat which should make for some interesting stage miles.

David and Sarah Rayner are joining us on their Sunbeam Tiger, David and I have done rallies in the past, including th Targa Tasmania rally wich I have mentioned previously. We shall be competing in the same class, category 1, where at the moment there will be just 3 competitors, myself, David Rayner and John Everard in an Alfa Romeo GTA. We will have a hard time competing against the locals who will obviously know the roads backwards and although Sue and I will be competing in the older car class, such luminaries as Jimmy McRay will be competing in more modern machinery. Cars coming from Europe include a Talbot Sunbeam 1600TI and a couple of Escort RS's.

The rally organisers have been building up this rally for a number of years and have encouraged European competitors with a very attractive package, including car transportation, flights and hotel accomodation. As the package cost was extremely reasonable, we had the car and the time, then taking this fantastic opportunity to rally in the carribean was a no brainer.

Watch this space for further updates and a full report when we return. If you are interested in reading more read the official press release here or visit the rally website here.
Posted by MarcusR at 16:55